Empress Elisabeth of Austria: The tragedy of Sisi 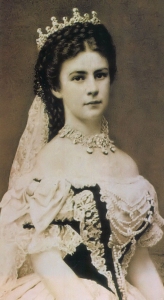 Elisabeth of Austria, born on the 24th December 1837 was the wife of Emperor Franz Joseph I, and Empress of Austria and Queen of Hungary.

Born into Bavarian royalty, Elisabeth, known as Sisi,  married Emperor Franz Joseph of Austria in 1854 when she was only sixteen years old. The marriage was arranged by Franz Josef’s mother, Princess Sophie, although it had originally been intended that Franz Josef would wed Sisi’s elder sister Helena. Franz Josef defied his mother’s wishes and the initial relationship between Sophie and Sisi was somewhat stained. Within weeks of her marriage it became apparent that Sisi was deeply unhappy at the Austrian court; she was nervous and depressed and found her court duties extremely stressful.

In 1855 Sisi gave birth to a daughter whom the Princess Sophie took into her own care. She named the child after herself and refused to allow Sisi to have any part n the child’s  upbringing. In 1856 Sisi gave birth to a second daughter whom Princess Sophie also removed from her mother’s care. Even though she had only been married for three years the lack of a male heir was considered a great shame for the royal family for which Sisi was blamed. Rumours started to spread and in 1857 a vicious pamphlet was printed a copy of which was left on Sisi’s desk.

‘…The natural destiny of a Queen is to give an heir to the throne. If the Queen is so fortunate as to provide the State with a Crown-Prince this should be the end of her ambition – she should by no means meddle with the government of an Empire, the care of which is not a task for women… If the Queen bears no sons, she is merely a foreigner in the State, and a very dangerous foreigner, too. For as she can never hope to be looked on kindly here, and must always expect to be sent back whence she came, so will she always seek to win the King by other than natural means; she will struggle for position and power by intrigue and the sowing of discord, to the mischief of the King, the nation, and the Empire…’

Princess Sophie was probably responsible for the pamphlet. Sophie was disappointed at the lack of a male heir but was also angry about Sisi’s increasing influence on the emperor. Sisi had apparently persuaded Franz Josef to show mercy toward some political prisoners. Tragedy followed the publication of the pamphlet when the two little archduchesses became ill, possibly with typhus. Gisela recovered quickly but two year old Sophie died. Sisi fell into a deep depression which affected her relationship with her husband and Gisela. She started to miss meals and would spend days on prolonged fasts eating as little as possible.

In 1858 Sisi finally gave birth to Rudolf. The birth of a male heir improved her standing at court but Sisi remained uncomfortable at the highly formal Austrian court. Sisi was liberal in her political views and her natural love of Hungary saw her frequently promote Hungarian interests at court. Her improved status following the birth of Rudolf saw her acting as a personal advocate for the Hungarian Count Gyula Andrássy, who also was widely rumoured to be her lover. Sisi suggested to the emperor that Andrássy be made the Premier of Hungary as part of a compromise to resolve the political situation between the two nations.

Despite her improved status Sis was still denied much of the day to day care of Rudolf. Her health remained delicate and she frequently visited Hungary to relax. Despite the benefits of being away from the court she continued to eat little and remained anxious and depressed. On her return however, nothing had changed and the princess Sophie continued to control the education and upbringing of the royal children.

Politically the Austro-Hungarian Compromise of 1867 had created the double monarchy of Austro–Hungary. Andrássy was made the first Hungarian prime minister and in return, he ensured that Franz Joseph and Elisabeth were officially crowned King and Queen of Hungary.

As a coronation gift, the royal couple were presented with a country residence in Gödöllő, twenty miles east of Budapest. In the next year, Sisi lived primarily in Gödöllő and Buda-Pest. She had become pregnant again and in 1868 in Budapest she gave birth to a third daughter Marie Valerie.  Marie was known as the ‘Hungarian child’ and was reared by Sisi without the influence of Princess Sophie who remained in Vienna and seldom visited Hungary. By 1872 the old princess died and Sisi found the stress of the Austrian court somewhat more bearable.

Despite this improved atmosphere Sisi spent the next seventeen years travelling extensively across Europe and north Africa. However in 1889 tragedy struck again when Rudolf died in a murder-suicide pact with his mistress Mary Vetsera, in Mayerling. Sisi collapsed on hearing the news and never fully recovered. After her son’s death she dressed exclusively  in black for the rest of her life. The following year she suffered another loss when her friend, Count Gyula Andrássy died.

For the next few years Sisi continued to travel never staying in any one place for longer than a few weeks. By 1898, Sisi was sixty years old and was continuing to travel widely. In September she travelled to Geneva, Switzerland where she stayed at the Hôtel Beau-Rivage. On 10th  September 1898, Sisi and her lady in waiting, Countess Irma Sztáray de Sztára et Nagymihály, left the hotel on the shore of Lake Geneva and walked the short distance to the the steamship Genève bound for Montreux.

The two women were walking along the promenade when they were approached by twenty five year old Italian anarchist Luigi Lucheni approached them. He appeared to stumble and  reaching out with his hand to steady himself stabbed Sisi with a sharpened needle file.

A former mason, railway labourer and former valet to the Prince of Aragon, Lucheni had originally planned to kill the Duke of Orléans. However, the Duke had left Geneva early. Failing to find the Duke, Lucheni, who had become an anarchist, decided to assassinate the next royal person he came across. Unfortunately for Sisi, a Geneva newspaper had revealed her identity.

Sisi collapsed but then helped by a local coach driver and Sztáray managed to help Sisi to wall to the Genève  where Sisi collapsed and lost consciousness.  Sisi was carried to the top deck and laid on a bench. Sztáray opened Sisi clothing and loosened her corsets. Sisi regained consciousness and asked ‘What has happened?’ before lapsing into unconsciousness again. Sisi was carried back to the Hotel Beau-Rivage but time they had reached the hotel she was dead.

An autopsy was carried our the following day by Dr Golay, had penetrated 85 mm into Sisi’s thorax, fractured the fourth rib, pierced the lung and pericardium and had entered the heart from the top before coming out the base of the left ventricle. The sharpness and thinness of the sharpened file had generated an extremely narrow and due to the pressure from Sisi’s extremely tight corseting, the haemorrhaging of blood into the pericardial sac around the heart had been extremely slow.
After the attack, Lucheni had fled down the Rue des Alpes and had thrown away the file. He was caught by two cabdrivers and a sailor, then secured by a gendarme. The file was found the next day.

Lucheni considered his act a political one and wished to be tried as political prison. Aware that the death penalty had been abolished in Geneva, he demanded that he be tried according to the laws of the Canton of Lucerne, which still had the death penalty. He knew that he would be found guilty and wish to be executed as a martyr for the anarchist movement. As Sisi was known for her charitable works and considered a blameless target, Lucheni’s sanity was initially questioned. Found sane he was tried as a common murderer and imprisoned for life. On 16th October 1910 he was found hanged in his cell.