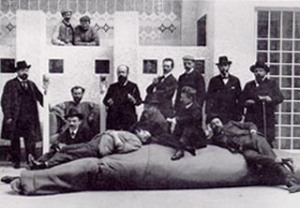 The Gesellschaft bildender Künstler Österreichs controlled the direction of art within Austria; and those forms were firmly rooted within Historicism. Innovation was not encouraged and young artists were expected to show deference to the hierarchy of the Gesellschaft bildender Künstler Österreichs. Moreover they controlled many of the grants and forms of support available to young artists. Many in Vienna looked to their fellow artists in the Berlin and Munich Secession movements and building on their successes created the Vienna Secession. However, unlike Berlin and Munich the Vienna Secession had no single defining art style. The aim of the Viennese Secession was to explore and embrace all forms of art outwith the narrow academic tradition. Their motto was ‘Der Zeit ihre Kunst. Der Kunst ihre Freiheit.’ (To every age its art. To every art its freedom.) This motto was placed above the entrance of their exhibition building. 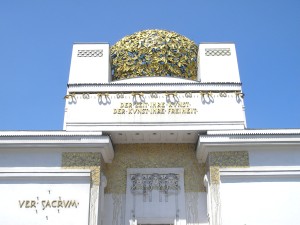 Although the Secessionists were free spirited and forward thinking they were not entirely out of keeping with the spirt of the age. Fin de siecle Vienna saw a multitude of new ideas and movements across the arts and sciences, philosophy and politics. While many proved ephemeral some, such as the work of Sigmund freud, would be extremely long-lasting and influential. The traditional rigidity of middle and upper class Viennese society made the establishment of the Secession all the more remarkable and their first exhibition in 1898 both shocked that traditional society and delighted the avant-garde.

Within the ethos of the Secession was a desire to bring all kinds and forms of art to the public and they developed a dedicated exhibition policy, which countered the establishment art exhibited by the Gesellschaft bildender Künstler Österreichs. One of their earliest triumphs was the exhibition which familiarised the Viennese to the work of the French impressionists. The work of the impressionists had been dismissed by the Gesellschaft bildender Künstler Österreichs as primitive daubs unworthy of the name art. But the Secession went beyond mere pictorial art; they blended and found complementarity in all art forms. Their fourteenth exhibition, designed by Josef Hoffmann, was dedicated to Ludwig van Beethoven. The exhibition had a statue of Beethoven by Max Klinger in the centre with a frieze of Beethoven’s life and music by Gustav Klimt mounted on the walls around the statue. The Viennese public were amazed by this approach and flocked to the exhibition.

In 1898, the Secession built their exhibition house. Designed by Joseph Maria Olbrich, the  building became a visible icon of the movement and was known as die Sezession. Within die Sezession art was displayed from across Europe including the works of Charles Rennie Mackintosh, Max Klinger, Arnold Bocklin and Eugène Grasset. The group also produced a magazine, Ver Sacrum, which contained articles and debates about art and artistic concepts and was illustrated in a highly decorative manner. 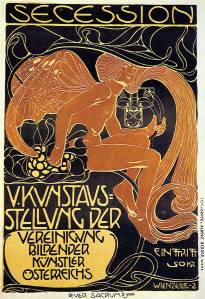 The Secession was not a static organisation but was ever evolving. Discussions about art, its form and application, and the place of art in society motivated many in the movement. In 1903, Josef Hoffmann and Koloman Moser founded the Wiener Werkstätte as a fine-arts society with the goal of reforming the applied arts. By 1905 differences in artistic concepts reached a head and Gustav Klimt seceded from the Vienna Secession taking several other artists with him.

With the loss of Klimt the Secession lost some of its drive and over the following years many of its original members drifted away to form other loose groupings or to work on their own. However, the influence of the Secession on the Viennese public was such that the dominant influence of the Gesellschaft bildender Künstler Österreichs on Viennese art had been forever broken and the art world revitalised.