The Premonstratensians in Bohemia 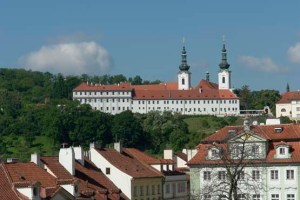 The Premonstratensians, also known as the Order of Canons Regular of Prémontré, or the Norbertines, were founded by Norbert of Xanten in 1120 at Prémontré and received papal approbation in 1126. The Order quickly spread across Europe during the twelfth century. The Premonstratensians followed the Rule of St Augustine but Hugh de Fosse, who took over leadership of the Order from Norbert, introduced many elements from the Cistercian Order. Norbert had originally been ordained a subdeacon and had served at the court of Frederick of Cologne and later that of Henry V, Holy Roman Emperor.  He had avoided ordination as a priest until after a riding accident in 1115 when he underwent a conversion. After several years of itinerant preaching he arrived at Prémontré where he established the first Premonstratensian House in 1120. Norbert quickly left Prémontré under the control of de Fosse and continued his preaching finishing up as Archbishop of Magdeburg in 1126.

The establishment of the Premonstratensian Order came about against the backdrop of the Canonical Reform of the eleventh and twelfth centuries.  The Lateran Synod of April 1059 had promulgated an Easter message of new awakening life for the Church. The canons of cathedrals and other chapters were to be called to live a true ‘apostolic way of life’. After his conversion Norbert had resolved to live the ‘Vita apostolica’ by preaching and gathering like-minded followers about him which then developed into the Premonstratensian Order.

The order developed somewhat differently in Western and Eastern Europe. It should be noted that at that time Eastern Europe meant the German states. Lands further east of German states were perceived as ‘other’ and ‘foreign’, at best Orthodox and at worst pagan. The western houses saw Prémontré as their mother house while the houses in Eastern Europe especially those around the eastern German states recognised Magdeburg as their spiritual head. This division was exacerbated by the papal-imperial conflict and resulting schism of 1160-1177. Prémontré and the western houses faithfully followed Pope Alexander III however the houses of the Empire recognised the antipope Hadrian IV.  During this period efforts to centralise the Order were initiated with individual houses being assigned to groups known as circaries with a subsequent reduction in the importance of visitations by the father Abbot to daughter houses. Alexander III decreed that the abbot of Prémontré was the father abbot of all Premonstratensian Houses.  This decree was ignored by the eastern houses and after the schism divisions remained with the eastern houses no longer sending their prelates to attend general chapters. The eastern houses also continued to resist attempts at centralisation of the order with missives from Prémontré quietly ignored. This lack of unity even extended to titles as western houses adopted the French tradition of calling their superior ‘abbot’ while eastern houses called their superior ‘provost’. The religious focus of the houses also differed. The western houses tended to be more contemplative in their focus. The eastern houses, while providing a contemplative communal way of life for the Canons, focussed more on the active preaching activities of the Order. However, despite these differences both east and west appear to have thought of themselves as one international Order.

Eastern Europe also saw a rapid spread of Premonstratensian Houses, albeit along somewhat different lines from those in the west. Houses were established by the lower nobility but also by bishops and princes. Rural houses were matched by those in urban locations and by the end of the twelfth century there were Premonstratensian Houses in Saxony, Westphalia, Thuringia, Bavaria, Rhineland Palatinate and Austria.

In Bohemia the Premonstratensian Houses appear to have been founded by a combination of the ruling Dukes and Bishops as well as more minor nobility. In addition the Houses appear to been generally found beside urban developments although there were some in rural locations. The diocese of Bohemia was under the Archbishopric of Mainz and many of the clergy in Bohemia were German or of German origin. As a result there was a relatively strong German influence in ecclesiastical matters in Bohemia. It is unclear, however, whether that influence extended to the founding of Premonstratensian Houses in the Eastern   European model or if the houses in Bohemia developed a third different Slavic model and what implication this may have had for the political development of the Bohemian state vis-a-vis the Holy Roman Empire.

The Holy Empire Empire of the twelfth century dominated central Europe. Emperor Frederick I, Barbarossa, (regnal dates 1155-1190) was keen to restore the Empire to its previous prestige and power under Charlemagne. Barbarossa’s Italian campaigns and Crusades had implication across vassal states of the Empire not least in the matter of raising money to pay for such activities. Barbarossa also had to contend with unrest inside the empire mainly caused by the activities of Henry the Lion of Saxony. Bohemia was at that time an independent state, albeit one that recognised the overlordship of the Emperor. Located in the centre of Europe beside the Empire and at the axis of trading routes such as the Amber Road, Jantarová stezka, from the Baltic to the Mediterranean and routes from the Rhine eastwards to Silesia and beyond gave Bohemia a somewhat significant status in twelfth century Europe. Rich from its silver mines in Kutná Hora and trading centres such as Prague and protected by its mountains and forests from easy domination by the Empire Bohemia was both an attractive target for and a source of independent irritation to the Emperor. It is possible that the arrival of the Premonstratensians in Bohemia from Germany could have afforded an opportunity for greater German, i.e. Imperial influence in the Czech lands without the need for aggressive and expensive military action. German Premonstratensians could, for example, have facilitated the movement of money into the Empire. On the other hand the subversion of the Germanic Premonstratensian model into a more Slavic type could have allowed Czech resistance to and rejection of Imperial influence in a relatively non-confrontational manner and the development of a degree of religious autonomy with regards to the Empire without the apparent challenge of more overtly political elements.

From the current evidence it seems that both interpretations may  be correct; although the balance between German influence and Czech resistance appears to have changed over the years. The initial impetus does seem to be that of Imperial control with senior members of the Bohemian Houses coming from other German Houses and new recruits being supplied by Magdeburg. Once established, however,  the Bohemian Houses developed outwith Germanic control albeit slowly and with varying degrees of success. By the 14th century several of the Bohemian Houses were actively working in and integrating with their local communities despite the continued efforts of Magdeburg to influence their develoment.

The model of development chosen for the Premonstratensian Houses in Bohemia had political implications and the use of monastic houses as a powerbase for political leaders and as a powerful propaganda tool is well understood within medieval Europe. The politically and militarily strategic position of Bohemia meant that the development of holy orders was never solely a religious act. Within Bohemia  religion and politics were intertwined and as the middle ages moved into the Renaissance religious dissatisfaction with the Catholic church and the dominating influence of the Imperial Germanic states grew. By the 15th century Jan Hus and his followers were challenging both church and state and by the 16th century the reformation was firmly entrenched in Bohemia. Religious upheavals continued in the 17th century as Bohemia along with many German states bore the brunt of the thirty years war. During these troubled years the Premonstratensians  went into decline and were forgotten by many. In the 21st century the Premonstratensians remain active in Bohemia with several houses such as Strahovský klášter in Prague where their members continue to preach the Vita apostolica.