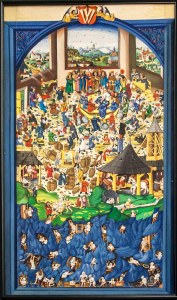 The portrayal of history on film has frequently raised tensions between academic rigour and cinematic vision. This tension is possibly best articulated by historians  who have spoken of films portraying how they imagined the past was lived rather than the reality.  However, whilst this tension remains film can give a ‘way in’ to history that can lead on a deeper understanding of a period. This is especially true of the Middle Ages, a society that was extremely visual and performative. Symbolic displays of wealth and power were ubiquitous from the gold plate and wall tapestries of the Dukes of Burgundy, to the public coronations of kings and popes across Europe. Stories were told visually in expensive illuminated manuscripts and simple painted church walls. What better medium therefore than film to shine a light on the medieval past? The tension between cinematic vision and historical rigour should not be ignored, however it could be argued this tension is less problematic that at first sight and that with the use of visual imagery and story telling the positive understandings of medieval history that can be gleaned from films outweighs the concerns of some academic historians.

Two films about the medieval world, Becket, a British/American film from 1964 and Údoli vcel (The Valley of the Bees) a Czech film from 1968, are examples of the potential of understanding. The film Becket is loosely based on the actual story around the friendship of Thomas Becket and Henry II in 12th century England while Údoli vcel is a fictional tale of a man who as a young boy is forced into a religious order and his relationship with an older Teutonic Knight set in the Czech lands of the 12th century. Both films explore the relationship between the men and their interaction with the church. The films both end with the rupturing of the protagonists’ friendship and murder.

Looking at visual imagery it is interesting to note that the ‘division’ between film and academic textbook is not necessarily as clear cut as first imagined. Both Becket and  Údoli vcel build their stories using the visual imagery of film however,  books such as Geoffrey Barraclough’s The Medieval Papacy, published in 1968, is awash with images while there are countless papers published on the displays of wealth in the medieval courts and the use of visual images to portray status across medieval society. Images were an integral part of medieval life and the written history of that period reflects this and does not merely relegate discussions about objects and images to the confines of art history or other specialist and obscure disciplines. Imagery pervades the written history of the Middle Ages and it is these very images that lend themselves so well to film.

In one scene in Becket Louis VII of France has an audience with two English ambassadors while he is being seen by his tailor. As Louis says to one of his own courtiers before the entrance of the ambassadors, ‘it will demonstrate to the English their exact social status in our court’. There is no evidence that this scene ever actually took place. However, what it shows is the medieval use of expensive clothing to display wealth, power and status. But the scene has a double meaning. As Louis displays his status to the English within the scene so the film shows Louis’ status and his display of that status to the audience. The scene in the film is a perfect modern mirror of its medieval counterpart that can occur only using a visual medium.

This mirroring is also seen in Údoli vcel in a scene where one of the Teutonic Knights, who had broken the rule of the Order, is executed in a brutal manner. The scene shows the knight stripped of his robes faced with several members of the order who symbolically snuff out the candles they are carrying and turn their backs on their former brother.  They do not see his actual death. The former knight steps backwards through a trap door and falls several feet into an enclosure where he is mauled by dogs. However, the camera stays at a distance and the audience, like the knights, do not actually witness the death. Similarly, both the audience and the brothers hear the sounds of the dogs, the tolling of the death bell and the Latin chanting but are both one step removed from the action but fully aware of the significance of these sounds. The fact that the medieval church forbade the spilling of Christian blood by its own members and thus would use secular authorities or other means, in this case dogs, to carry our execution is vividly and memorably illustrated in this scene.

Using pictures to tell a story has a long history within human society. The cave paintings in the Dordogne are estimated to be about 17,000 years old. And this story telling is seen very clearly in the case of the medieval church. Church walls were painted with scenes from the bible which were thought to be historically true. (It can be argued whether this was actually believed by everyone but that is a matter for another discussion.) So telling historical stories with pictures is not a new phenomenon. It could possibly be argued that the only thing that is new is that the images are moving. Yes, in the 21st century, there are huge technological advances but the basic story telling is the same now as it was in the 12th century.

Becket shows the enthronement of the Archbishop of Canterbury. The audience sees the cathedral, the procession, the robes, the laying on of hands, hears the music, the Latin prayers and ‘Becket’ prostate on the ground. This is not a short scene but lasts for just under five minutes but still manages to hold the audience’s attention. Without a thorough knowledge of Medieval Catholic Church ritual in what other medium could such a sense of what that ceremony would have been like be gained? The detail may not be exact but the overall effect is to inform the audience of the magnitude and importance of the ceremony and in that, it could be argued, the film Becket succeeds where many a textbook does not.

In Údoli vcel an early scene shows a fight between the knights and some colliers over a sword. While the scene itself is imaginary the portrayal of the poor colliers with wooden staves fighting two heavily armed and militarily trained knights evokes clearly the overwhelming difference in their status and the desperate poverty of the colliers that drives them to commit such a risky act. As in the Becket scene although some of the exact detail may be incorrect the audience gains a clear understanding of the perilous nature of existence for the peasantry in the Czech Lands of the 12th century where an opportunity for gain however slight, and however dangerous, has to be seized.

These two scenes, these visual displays, evoke an understanding of the medieval world that a dry recitation of facts or the reading of some academic papers can seldom generate.

While it would seem that medieval history is a perfect match for film the tension between academic rigour and cinematic vision remains. Historians are in the business of ‘demystifying’ history while film uses a ‘linear narrative’. But are these different approaches necessarily in conflict? While present day historians may see the ‘new’ construction of history on the screen as artificial so the ‘old’ construction of history on the written page could be equally seen as artificial to previous generations for whom history was based in the oral tradition. Does this then mean that the tension between academia and film is redundant? Perhaps that is a step too far? It is doubtful if anyone in the 21st century would argue that history is the sole preserve of the academic historian. And equally there are probably very few academic historians who would wish to set themselves up as the history police. However, as facts without imagination can produce history of the dullest variety so imagination without facts does not produce history at all. The tension between academic rigour and cinematic vision is not a negative check on new innovations within history but a positive spur to the production of better history: the maintenance of intellectual rigour acts as ballast to cinematic and imaginative vision. The ‘linear narrative’ when derived from the historians’ rigour allows the audience an understanding of the historical event or era that can be complementary to the written text rather than undermining it. The tension that exists can be a positive driving force if only academic historians would embrace it. Allowing for some of the wilder imaginings found in the likes of Braveheart most audiences watching historical films recognise the difference between what they see on the screen and academic history. There is no need therefore to take that positive tension and inflate it into an unbreachable divide.

Criticism of historical film is all too easy for academic historians, and in many cases it is all too deserved. There are historical films that not only promote the story over the facts but actively distort the facts for the sake of the story. But other than a desire that films ‘adhere to the facts’ few other constructive ideas are ever forthcoming from academic history. In the case of medieval history films, while adherence to the facts is to be strongly promoted, perhaps historians should learn to occasionally put away their beloved textbooks and manuscripts and re-engage with the visual images and story-telling that would have been familiar to their 12th century forbears. The manipulation of imagery has come a long way since the 12th century. As have audiences. The credulous belief in the stories painted upon a church wall has evolved into a sophisticated ability to tell reality from fiction. Medieval history films, when produced with a sense of respect for that sophisticated audience, can surely take their place with others as a valid form of history telling. The relationship between film and the historical period they depict and the times that produce them is complex and that complexity should not be denied. However, if we can retain our critical senses and remain aware of the tension between cinematic vision and historical rigour then the historical truths contained in medieval history films such as Becket and Údoli vcel can in their own way contribute to historical discourse.