Mata Hari is a name that still resonates 100 years after her execution for espionage. But why do we find female spies in general and Mata Hari in particular so fascinating?
Why should we remember a woman who betrayed her adopted country, a self-proclaimed international woman and a serial fantasist? Was it the times in which she lived, the mysteries of spying? Or was it the woman with immense sex appeal and sheer bravado that broke all the rules that still fascinates today? 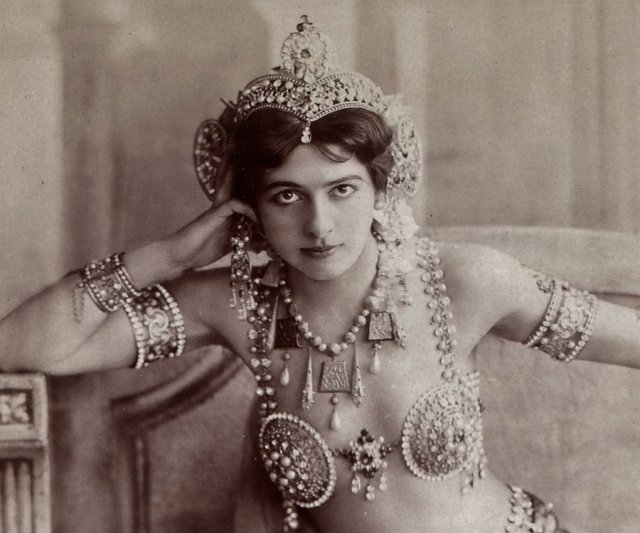 No-one can think about Mata Hari without thinking about her sex appeal. A woman who boldly declared:

‘From the time that I was a child I loved men: a strongly built male brought me to a state of ecstasy’.

Even those who know nothing about her cannot help but be attracted by the images of her in her eastern costumes. The craze for exotica was all the rage in Paris in the early 1900s and Mata Hari exploited that for all it was worth. Using her black hair and dark liquid eyes she knew how to excite men. She never danced naked but gave sensual performances that captivating audiences. She was the embodiment of the sexy spy; unattainable and dangerous she was every man’s dream. Even the name Mata Hari, eye of the dawn, entices and tempts us. The real spies were, of course, mousey creatures that no-one gave a glance and their names, if we ever knew them, have long been forgotten. We do not want the reality, we crave the excitement of the fantasy. An intriguing name, declared love of sex, a carefully crafted exotic image and dancing in transparent chiffon, Mata Hari could not fail to entrance. The women of the time were still in corsets and floor length skirts while she moved sinuous hips and arms across candle lit stages. The can-can girls of the Moulin Rouge were fun, enthusiastic French girls, but here was a creature from the east that promised everything.

Of course she wasn’t from the east at all, being from a small Dutch town in Friesland but she was a fantasist that loved life. In a world of work and responsibilities, the rest of us are often bemused by those who live their fantasies and she did just that. She blurred the lines between reality and fantasy years before ‘fake news’ was ever coined as a phrase and did it with such style and élan that even when her lies were exposed she was always forgiven. Mata Hari claimed she never spied for Germany but took their money as ‘payment’ for her furs that they had impounded at the start of the war. We may believe her or not but to take the money and not do any spying? Now that takes nerve. And to do so with a smile and a kiss on the lips? That took Mata Hari! Those work-a-day successful spies whose names we have long since forgotten give us stories of worthy heroism but she gives us fantasy. And for all she was amazing and wonderful she was also human with a million human flaws, just like us. She was stupid but sharp-witted, she was promiscuous but loving, enchanting but ruthless, self-willed and self-obsessed, simple but scheming, mercenary but spendthrift, infuriating but alluring. Mata Hari was just like us and yet was not. She defies categorisation but remains fascinating. A girl from a small town that became an international woman.

An international woman who danced easily into the hidden world of spying and intrigue. A world that is utterly fascinating, probably because it is so hidden. The enduring success of the James Bond franchise is proof of that. The fantasy of James Bond allows us to ride fast cars, visit exotic locations, outwit other countries’ secret agents, all from the safety of a cinema seat. With Mata Hari we can equally live the life of the international spy but with the added edge of excitement that come from the fact that hers is a true story. How could this social butterfly with no apparent head for politics worm secrets out of her many lovers? Well we can all imagine how. The reality of espionage work; copying files, passing information in brown envelopes may be vital but ultimately dreary work. Making love in the afternoon on the chaise lounge of a general’s office with the excitement of potential discovery at any moment? That is the stuff of fantasy, that was Mata Hari’s life.

But this was a life being lived against the backdrop of the Great War. The tragedy of the war to end all wars that resulted in the deaths of so many millions. The world can be a scary and unpredictable world. Society creates rules that give order and comfort, especially in times of stress. If the rules are broken, then what? In peace time those who break the rules are daring, exciting and even to be admired, even while their antics are still somewhat constrained. You can go so far, but no further. But Mata Hari? She went further, she always went further than anyone else. Which was fine until war broke out. In war time, we all buckle down, even most rule breakers, and ‘do our bit’. Mata Hari did not buckle down. She did not change her clothes for the sombre greys and browns of the Paris matrons. She did not stop drinking champagne and flirting with officers. She had been the colourful butterfly that we all, secretly, wanted to be. But then it was time for all to pull together. The joke of taking the Germans’ money but doing no spying was no longer funny. And then when it all went wrong and she ended up in front of a firing squad, we could all heave a sigh of relief; the rule breaker had been punished, the social order restored, everything was going to be all right. And yet…the memory of that colourful butterfly remained.

Like the ‘safe’ scare of a fairground ride, the story of Mata Hari allows us to dip into her world of fantasy, albeit at a safe distance. We can look at her photographed in all her ‘eastern’ glory and imagine how ‘we’ would have done things differently; we would not have got caught. A fantasist with sex appeal who dabbled in the world of espionage and broke all the moral codes of the day, she was the ultimate female spy and remains, unlike many of her more successful colleagues, unforgettable.

This blog was originally published on The history Press website
https://www.thehistorypress.co.uk/articles/mata-hari-the-enduring-fantasy/