Maria Theresa Walburga Amalia Christina was the only female ruler in the House of Habsburg. An absolutist monarch, she nevertheless introduced a series of reforms across the Habsburg dominions that saw the lives of the peasants improved to a degree not seen across most of the rest of Europe. 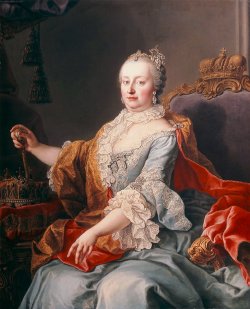 Within months of her succession to the throne, Maria Theresa faced two major economic problems; the loss of the highly productive territory of Silesia and the  widespread abuse of manorial rights by the nobility. To tackle the first issue she introduced a series subsidies to entice the textile trade to move from Silesia to Bohemia. Guild privileges were restricted allowing non-Guild workers the opportunity to

enter the textile trade. The opening up of this trade then allowing landless peasants greater job opportunities as they filled the unskilled vacancies left by the semi-skilled who moved into the textile trade. This increase in work and opportunities for greater diversity in work stimulated more growth encouraged and financed by Jewish entrepreneurs. The second big initiative was the regulation of noble privileges vis-à-vis peasant well-being. This was a highly contentious issue and one that Maria Theresa was initially reluctant to address but several instances of peasant unrest convinced her to act. Peasants were forced to work for their lords for a set number of days a week ‘Robot work’. In some instances this could amount to three or four days a week leaving the peasant unable to cultivate their own land and subsequently earn enough to pay their taxes.  In 1771-78, a series of ‘Robot Patents’ were issued by Maria Theresa these patents regulated and restricted the amount of peasant labour the nobles could demand in the German and Bohemian parts of the realm. (The issue remained contentious in Hungary.)

More reforms followed. If peasants were to be more productive they needed to be educated and a series of educational reforms were introduced.  Previously, the existing, non-compulsory, primary schools had been run by the Catholic Church. Maria Theresa established compulsory and secular primary schools. Education became compulsory for children of both genders from the ages of six to twelve. However, this particular reform was not universally liked. Many peasants wanted their children to work in the fields instead. While those not sending their children to school could be arrested, in many rural areas this was ignored.

Maria Theresa also introduced many health improvements. After the smallpox epidemic of 1767 she had her own children inoculated, changing the opinion of many. Mass inoculation was introduced, often overseen by the army as many peasants remained fearful. However, by the end of her reign the mortality rates from communicable diseases amongst the poor of the cities was lower than in many comparable states in western Europe. Another major health benefit was the prohibition of the use of lead in any eating or drinking vessel. A measure that was again introduced earlier than in many other states.

While these reforms obviously benefitted the countries finances they also benefitted the individual peasants. Moreover, at their heart, these reforms recognised peasants as autonomous individuals who had the right to work their own land and to chose their own path in life. They saw peasants as people deserving of an education, no matter how basic and of health protection. Maria Theresa was an absolutist monarch and an arch-conservative, but she was also a child of the Enlightenment. The reforms she introduced were based on rational beliefs that recognised the basic humanity of the peasants of her dominions and afforded them a degree of respect and dignity.