Well I’ve not posted here for a couple of months because my biography of Mata Hari, ‘A Tangled Web’ has just been published.  I have been busy with a few final details working with the great team at The History Press and preparing for my ‘meet the author’ launch event at the Imperial War Museum London on Saturday the 29th July between 11am and 1pm and between 2pm and 4pm.

Mata Hari has been a fascinating character to research and write about. A dancer, a courtesan and a spy, she was beguiling and oozed sex appeal. But she was also spoilt and maddening and  working through archives from Paris and London was no easy task.  She was an untrained dancer who won the ‘war of the tights’ beating others such as Isadora Duncan.  She had lovers galore and was counted among the best of La Grande Horizontale. Then of course she met and fell in love with a young Russian officer and declared she would give up all her other lovers just for him.  But for all the fun and the lovers the Great War had broken out and her world was never the same. Embroiled in espionage, she became entaged in a web of lies and fantasies from which there was no escape and for which she paid the ultimate price. 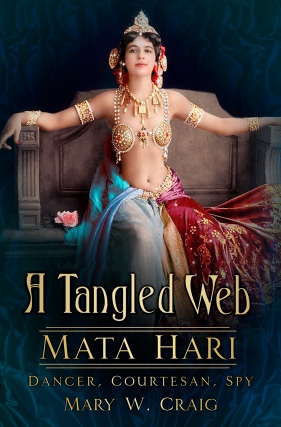