Joseph Roth, born Moses Joseph Roth, died in Paris on 27 May 1939. Roth was born in the small town of Brody near Lviv in East Galicia, part of the Dual Kingdom of Austria-Hungary, on 2 September 1894. His parents were parts of the large Jewish community in Brody, although Roth’s father had left the family home before Roth’s birth. 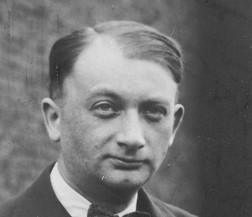 Roth showed early promise at school and while at the local high school was encouraged by his teachers to consider attempting to gain a university place. In 1913 Roth began university in Lviv but was unable to settle down to his studies. In 1914 he transferred to the University of Vienna where he read philosophy and German literature. In 1916 Roth left the university and joined the Imperial Habsburg army. Roth was posted to the Eastern Front where he served as a war correspondent. Roth witnessed at first hand the conditions of soldiers on both sides of the conflict as well as the inter-racial discriminations suffered by the many ethnic groups within the Habsburg forces.

At the end of the war Roth returned to Vienna and started work on several left wing newspapers rather than returning to his university studies. One of the main publications he wrote for was Vorwärts (Forward) the central publication of the Social Democratic Party of Germany. Roth wrote under the pen-name of Der rote Joseph (The red Joseph). Roth’s left wing politics and the political events in Weimar Germany  drew him to Berlin in 1920 where he worked for the Neue Berliner Zeitung and by 1921 he was also writing for the Berliner Börsen-Courier.

In 1922 Roth met and married Friederike (Friedl) Reichler and the couple initially set up home in Berlin before Roth’s  took them across Europe. in 1923 Roth was employed by the Frankfurter Zeitung as their main foreign correspondent. He travelled across Europe, filing reports from all corners of the continent. At the same time Roth was working on his novels. The first, Das Spinnennetz (The Spider’s Web), was published in serial form in 1923 in Austria. This success galvanised Roth to continue his fiction writing Hotel Savoy and Die Rebellion (The Rebellion) in 1924, April. Die Geschichte einer Liebe (April: The Story of a Love Affair) and Der blinde Spiegel (The Blind Mirror) in 1925.

While Roth’s writing had continued to be successful his marriage was in trouble. Roth and Friedl had been deeply in love when they had first met but over over several years Friedl had became mentally ill. By the late 1920s Friedl was diagnosed as schizophrenic. Roth was advised that she would need constant medical care and Friedl was admitted to a private lunatic asylum. This continued care would put a strain on Roth’s finances for the rest of his life.

On January 30, 1933, Adolf Hitler became Reich chancellor; Roth left Germany and moved to Paris where he spent most of the next six years. The increasing dominance of right wing politics strongly influenced his writing both reportage and fiction. His works evoked the memory of Central Europe before 1914 and in particular the Dual Monarchy. Most notably in works such as Radetzkymarsch (Radetzky March) written in 1932 and Die Büste des Kaisers (The Bust of the Emperor) written in 1935. His reportage work highlighted the plight of outsiders; Jews, the homeless, drunks. This element of his work produced Juden auf Wanderschaft (The Wandering Jews) in 1927 and Was ich sah: Berichte aus Berlin, 1920-1933 (What I Saw: Reports from Berlin), 1920-1933).

In 1936 Roth had an affair with the German writer Irmgard Keun. The pair worked together, traveling extensively across Europe. However, despite this Roth was becoming increasingly depressed and drinking to excess as the Nazis tightened their grip on power in Germany. By 1938 the affair had burnt itself out and Roth D Keun went their separate ways. At the same time, despite continuing to write, Roth was earning less money. Fewer people were buying books and the number of left wing newspapers was decreasing across Europe. His depression and heavy drinking continued and he lived in a series of increasingly shabby hotels across Paris.

In 1939, his novella Die Legende vom heiligen Trinker (The Legend of the Holy Drinker) was published. The story tells the tale of a homeless alcoholic and his attempt to regain his dignity. Just after its publication Roth heard that the playwright Ernst Toller had hanged himself in New York. On hearing  the news Roth drank himself into a collapse and died on May 27 1939.

Roth is interred in the Cimetière de Thiais, south of Paris.

Friedl Roth was murdered by the Nazis as part of their Gnadentod (mercy death) policy regarding the mentally ill.