On 23 January 1897 Margarete Lihotozky known as Grete, was born into a comfortable bourgeois family in Vienna. Her father Erwin Lihotozky, was a manager for the municipal expansion fund for the Vienna City Council. Grete was a very bright child and her parents, who was extremely liberal minded, encouraged both their daughters, Grete had an older sister Adele, in their studies. In her final year at school, in 1915, Grete expressed her desire to continue studying and decided to apply to the Kunstgewerbeschule (today the University of Applied arts, Vienna). Although Grete’s school certificate and portfolio were excellent and she was likely to pass the entrance examination the Kunstgewerbeschule had never admitted a female student. Her mother, Julie, who was herself very artistic, had a friend who knew the artist Gustav Klimt. On being asked, Klimt wrote a letter of recommendation for Grete. Two hundred and forty prospective students sat the entrance exam for the 1915/16 term. Less than forty passed, Grete was one of them and she was duly enrolled at the Kunstgewerbeschule for the term beginning September 1915. 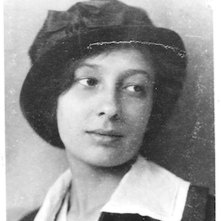 Grete flourished at the Kunstgewerbeschule. She studied under Anton Hanak and Oskar Strnad and won prizes for several of her designs in her first and final year.  Strnad was one of the leading pioneers of sozialer Wohnbau in Vienna at the turn of the century. Sozialer Wohnbau designed stylish but affordable social housing for the working class. The connection between design and functionality that was first made in Vienna would spread across Europe spawning movements such as the Bauhaus in Weimar. Grete instinctively understood the concept of design and functionality and this concept formed the basis of all of her later work. After graduating, Grete was involved in several projects that incorporated sozialer Wohnbau. By 1920 she was working with Adolf Loos designing housing for those injured in the Great War. She then started work on the Österreichische Siedlung und Kleingartenverband (Austrian Settlement and Allotment Garden Association). The Österreichische Siedlung und Kleingartenverband was created to help war veterans and displaced persons find affordable housing in which to live and land on which to grow their own food. The work with the Österreichische Siedlung und Kleingartenverband saw Grete working alongside the philosopher Otto Neurath and Josef Frank the architect.

In 1926 Grete was approached by Ernst May the architect. May was working as the city planner for the council of Frankfurt am Main. After the devastation of the Great War the council has decided on a city wide regeneration called the New Frankfurt project to address their various housing issues. The New Frankfurt project created several housing developments across the city all of which incorporated sozialer Wohnbau principles. It was while working on this project that Grete developed the Frankfurt Kitchen. Although not noted as a cook herself Grete recognised the amount of time that working women spent in their kitchens. She also recognised that kitchens were often the least designed aspects of working class homes. Looking at the work of Frederick Winslow Taylor and her own research Grete worked to design the ‘housewife’s laboratory’. Her idea was to maximise comfort and working area but in a minimum of space. Grete looked at various examples of cooking spaces and finally used a dining car kitchen from a train as a basic model. By the time she had finished Grete had designed a well designed, comfortable, kitchen that was the prototype of the modern built-in kitchen. Ten thousand of these kitchens were installed into the social housing developments in Frankfurt before the design spread across other German and central European cities.

While in Frankfurt Grete met and married the fellow architect Wilhelm Schütte. Despite this happiness there were tensions as the political situation in the Weimar Republic deteriorated. By the late 1920s Grete and Wilhelm joined the ‘May brigade’. This was a group of seventeen architects including Ernst May and Erich Mauther all of whom were either communists or socialists. In 1930 the May Brigade moved to Moscow to work on the first of Stalin’s five year plans. One of the group’s first commissions was the creation of the city of Magnitogorsk in the Urals. The existing settlement was a small village of nomadic pastoralists but Stalin had identified the settlement for a steel works and a modern city capable of housing 20,000 workers was required. After this initial project Grete and Wilhelm continued to work on several other schemes in the Soviet Union but became increasingly disillusioned with Stalin’s regime. Life in the Soviet Union became dangerous as both Grete and Wilhelm were vocal in their disapproval of the political regime and in 1937 they left and were spared imprisonment under Stalin’s Great Purge.
In 1838 Grete and Wilhelm moved to Istanbul to take up teaching posts at the Academy of Fine Arts. While in Istanbul Grete met Herbert Eichholzer the Austrian architect who was a leading activist in the Kommunistische Partei Österreichs (KPÖ) (Austrian Communist Party). Eichhholzer was a leader organiser of the Communist resistance to the Nazis. In 1939 Grete joined the KPO and in late 1940 she travelled to Vienna via Greece and Yugoslavia to meet with members of the communist resistance. She took copies of correspondence between Johann Koplenig, chair of the KPÖ, and Josef Dobretsberger, a former member of the Schuschnigg government and Professor of National Economy in Graz.

A meeting was set up for the 22 January of 1941 where Grete was due to meet a man named ‘Gerber’, to discuss establishing a communications network between Turkey, France, Czechoslovakia and the Society Union. ‘Gerber’ was in reality Erwin Puschmann a senior member of the KPÖ and leader of the Austrian Communist resistance movement. Grete and ‘Gerber’ met at the Café Viktoria. The two spoke briefly and quietly. Just as they started to exchange papers two Gestapo men appeared and attacked Gerber grabbing him round the neck. Grete tried to hide her papers but was also held and the papers retrieved. Grete and ‘Gerber’ were then taken out the back entrance of the café and bundled into a waiting car. They were driven to the infamous Hotel Metropole, on Morzin square. When Grete arrived at the Hotel Metropole she discovered that Eichholzer and several other comrades had also been arrested. They were all were charged with treason.
Grete  was sent to Schiffamtsgasse district gaol in Vienna to await trial. The trial in the Volksgerichtshof (people’s court) began on 22 September 1942. All of the prisoners showed signed of malnutrition and Eichholzer and Puschmann had also been tortured while waiting trial. All were found guilty and sentenced to death. On 7 January Puschmann and Eichholzer were executed by firing squad in Vienna. Grete’s sentence was commuted to fifteen years in prison. She was sent to Aichach gaol in Bavaria. She was freed by a group of American soldiers on 29 April 1945.

By 1947 Grete had returned to Vienna however as she remained a communist this tainted her professional reputation in the eyes of many in Austria due to the post war political settlement in Europe. Austria had been badly damaged during the war and there was a dire need for decent affordable housing; architects were much sought after. However, the fear of the power of the Soviet bloc rendered Grete persona non grata with many city authorities. Grete found work as a consultant in China, Cuba and the German Democratic Republic. Her continued communist stance also caused something of a strain within her marriage and in 1951 she separated from Wilhelm.
During the 1960s Grete continued to work on workers’ housing projects but also increasingly spoke out on the need for peace between nations. Whilst remaining a communist, Grete nevertheless campaigned for a need for understanding between states despite differences in political ideology. She recognised the devastation wrought by the second world war and placed the blame squarely on the shoulders of politicians of all brands. By the late 1970s the Austrian authorities had relaxed many of their attitudes and Grete’s work became increasingly recognised.

In 1977, Grete received a medal for her peace work, in 1978, she was awarded an honour badge for her work in the Resistance and then in 1980 she was awarded the Architecture Award from the City of Vienna. In 1988, when she was to be awarded the Austrian Decoration for Science and Art, Grete refused to accept the award on the grounds that the then Austrian Federal President Kurt Waldheim had a somewhat unsavoury wartime record. Outraged Waldheim withdrew the honour which Grete only received in 1992. In 1995, when she was ninety eight years old, Grete, with a group of other ex-Nazi prisoners, successfully sued Jörg Haider a member of the National Council. During a debate in the National Council Haider had described Nazi concentration camps as ‘prison camps’. Grete was awarded the Grand Decoration of Honour in Gold with Star for Services to the Republic of Austria in 1997. 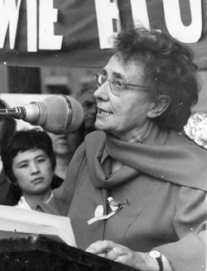 Margarete Schütte-Lihotzky died in Vienna on 18 January 2000. She was interred in an Ehrengrab (memorial grave) at the Zentralfriedhof, Wien-Simmering.